Update on Story of Msgr. Tony Anatrella, Vatican "Expert" on Homosexuality: Archdiocese of Paris Sets Up Commission to Investigate Allegations 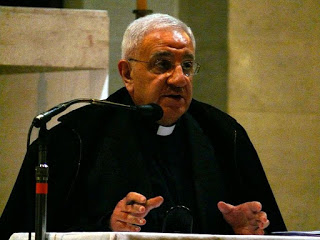 An update for you on a story we have discussed here in the past: as I told you this past May (here, here, and here), news reports surfaced in late April and early May in Dutch and French media of new allegations made against the Vatican's "expert" on homosexuality, Monsignor Tony Anatrella. Anatrella has a history of characterizing homosexuality as a psychological disorder that can be "cured" through "reparative" or "conversion" therapy. He was invited to the Vatican's Synod on the Family to advise the synod about the topic of homosexuality, and when a Vatican document instructing new bishops that they need not report allegations of sexual abuse by clergy to criminal authorities came to light and caused consternation, it was revealed that the document was citing Tony Anatrella in giving this advice.

The news reports to which the links above will point you indicate that, though rumors about inappropriate sexual behavior by Anatrella in a therapeutic context have floated around for a long time now, new allegations had begun to be made in the first part of this year — allegations that, in a therapeutic context and with claims that his behavior would "cure" young men sent to him for a "cure" of homosexuality, Anatrella crossed boundary lines and inappropriately touched these clients.

And here's the update I want to share with you now: several days ago, a group supporting survivors of childhood sexual abuse in Lyons, Parole libérée, published an appeal to anyone who might have been molested by Anatrella to come forward. This appeal notes that the diocese of Paris has established a special commission to investigate complaints about Anatrella, to be chaired by Eric de Moulin Beaufort, auxiliary bishop of Paris et vicar general of the archdiocese of Paris.

As Malo Tresca notes for La Croix, the Paris archdiocesan commission to look into complaints about Anatrella's activities was set up in September. It has apparently been established because more victims have come forward with allegations similar to those previously made by former clients of Anatrella, of sexual "touching" in a therapeutic context, with claims that such "touching" has a curative effect on homosexuality. And as the Parole libérée announcement states, the hope is that, now that a commission has been set up to look into Anatrella's activities and as more people alleging inappropriate behavior by him in the context of therapy are coming forward, it may be expected that even more former clients will now feel free to speak out.

My conclusion to this story to the extent that we now know it: the Vatican has not been wise in its choice of people to advise it about homosexuality. Not in the least.

(I'm grateful to my Facebook friend Jean-François Garneau for sharing the Parole libérée article with me.)

The photo of Msgr. Tony Anatrella is by Peter Potrowl and has been uploaded to Wikimedia Commons for sharing online.
William D. Lindsey at 10:14 AM