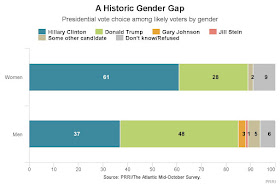 Rachel Fitzgerald's contribution to our discussion of Donald Trump's boasting about sexual assault of women is just too good not to share: she speaks of her and her husband Mark Shumway's response to Trump's attempt during the debates to intimidate Hillary Clinton by looming behind her, stalking her, as it were:

Reading this long commentary midday on west coast 10/11 --an arduous, painful read-- I am thinking about my work with women, my Irish grandmothers and godmothers, my devotion to Mary Virgin and Mother, my revolt after Humane Vitae's anti-woman stance, and especially, I am recognizing the links between the exploitation of the earth and Trump's casual/misogynistic abuse of women. Early during my work in South America at an ecofeminist school, we reviewed the multiple references in the OT [i.e., Old Testament] to the feminine face of the divine wisdom gradually sentimentalized as earth gods are replaced by those of an empire. (And the face of the empire was/is US economic policies.)

Now, in an attempt to understand the craziness of exploiting the natural world, our political landscape involves the comic and tragic downfall of a political party ignoring the dominator/ dominated nature of public service itself. My husband and I watched Trump's invasion attempts behind Hillary's commenting-while-walking-about, his easy-to-recognize stalking. Mark--whose work was with convicted sex criminals-- saw the familiar physical proximity to the intended victim first while I felt Hillary Clinton's unsafe but determined refusal to be intimidated-- accompanied by an assessment of escape routes both physical and metaphysical. Game over, Trump.

Here are some tweets I captured as the debate was taking place, that I thought were extraordinarily good, and which dovetail with Rachel's comments here:


This is a master class in abuse. #debate
— Diana Butler Bass (@dianabutlerbass) October 10, 2016


Here's the debate where Donald Trump tries to not look like a sexual predator. pic.twitter.com/N5hSGtLSGk
— jake (@jakebeckman) October 10, 2016


Protip: @realDonaldTrump if you don't want to look like a creep to women don't literally creep up behind them while they're talking. #debate
— W. Kamau Bell (@wkamaubell) October 10, 2016


If anyone has ever been in an abusive relationship this is exactly how conversations go. #debate
— Chase Strangio (@chasestrangio) October 10, 2016


With all of this, is it any wonder that PRRI finds, with polling results it publishes today, that there's an historic gender divide this election cycle:


See the chart at the head of this posting, which is from PRRI at the link I have just provided.