Thomas O'Loughlin on Mass as Theater and Eucharist as Commodity: Theological Underpinnings of These Ideas 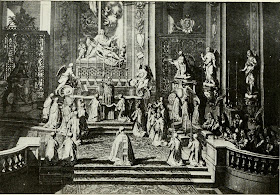 As a follow-up to what I posted yesterday about how the aberrant Mass-as-theater theology of many Catholics is asserting itself all over again in this pandemic, some sound theological reflection from theologian Thomas O'Loughlin in an essay entitled "Reimagining the Eucharist":

For too long – some historians would say since the seventh century – Latin Christians have tended to think about the Eucharist as an object (something that happens due to the activity of the priest, which the lay faithful observe rather like the audience at a play or a concert) or as a commodity (with those present behaving as religious consumers). The language we use is the giveaway. We talk about “getting Mass” and “attending a Mass”, of “getting Communion” and “taking Communion”. The image in our minds is that the Eucharist is something “out there”, which we watch or somehow obtain and make our own, as if we were theatregoers or consumers.

But the word “Eucharist” relates to a verb: it is something we, the whole People of God, do. It is the activity of thanking God the Father as a gathered community – and we offer this praise and thanks through Christ our Lord. The focus is on thanking the Father. The access to the Father is provided to us in the Spirit through Jesus Christ – and the prayers are led by the priest. It is our basic activity as Christians, not some “thing” that the priest does for us or makes for us.

There is something infantile, in my view, about the underlying theology of "I need to watch Mass" or "Watching Mass connects me to bishops and priests (!)." That theology often seems to translate into, "I have no social responsibility to anyone other than myself," and goes hand in hand with, "I'll go to church services come hell nor high water, and the consequences for others be damned."

How do those who claim that their religious outlook is rooted in Jesus and the gospels end up in such a place, I ask myself?

The illustration is a plate from John Walsh, The Mass and Vestments of the Catholic Church (Troy, NY: Troy Art Press, 1910), from Wikimedia Commons.
William D. Lindsey at 11:36 AM